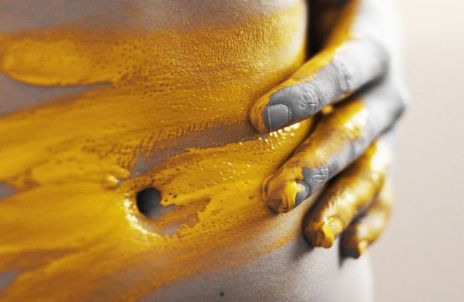 Also known as the solar plexus, the mid-abdominal organs include the liver, gall bladder, stomach, pancreas, and spleen.

The liver is the largest digestive gland in the body.  Its functions are highly diverse and include metabolism, synthesis and storage of nutrients, detoxification, hormone balance, blood clotting, storage of fat-soluble vitamins, heat production, and the synthesis and secretion of bile.  It is a heavy organ weighing on average between 2-5.5 lbs.  It has as much as 1.5 liters of blood passing through it per minute.

The liver sits in the right upper abdomen below the diaphragm.  It’s lower border runs along the right costal margin and crosses over to the 5th/6th intercostal space on the left mid-clavicular line.  It goes as high as the right 4th/5th intercostal space anteriorly and to Rib 7 posteriorly.  It has two lobes divided by the falciform ligament.

The gallbladder is a small pouch-like organ that sits under the liver.  I often imagine it like a thumb.  The general function of the gallbladder is to store and concentrate bile.  During digestion the gallbladder contracts and the bile passes through the bile ducts into the duodenum.  Bile salts emulsify the fats, which allows the enzyme lipase to more readily digest them. The fundus can be found at the 9th costal cartilage.

The pancreas is a fish-shaped organ whose head sits in the crook of the duodenum and whose tail travels behind the stomach towards the spleen.  It sits at a diagonal and is retro-peritoneal.  It has both endocrine and exocrine functions.  As an exocrine gland, it is involved in digestion creating enzymes that are alkaline and break down proteins, starches, and fats; and neutralize stomach acids.  These enzymes enter the duodenum via the pancreatic duct.  As an endocrine gland, the pancreas secretes insulin and glucagon into the blood stream to manage blood glucose levels.

The spleen is a soft vascular organ that lies against the diaphragm posteriorly between the 9th and 11th ribs.  It is part of the vascular and immune systems, not the digestive system.  The spleen filters blood, removes iron from hemoglobin, produces lymphocytes and antibodies, and stores and releases blood with high concentration of red blood cells.

As you find yourself more familiar with each of the mid-abdominal organs, imagine the sliding and gliding in relation to each other.  Let them compress and expand.  Let them move through space on their varying axis and in all three planes.

Notice how allowing these organs to take space can support the transition of the thoraclumbar junction.  Notice how you can move them collectively headwards and tailwards to support homologous movement.  Let them shift laterally through space to support side-bending through the spine.  How can they support rotation?  Try plank to side planks with the support of the mid-abdominal organs.

Begin to do a typical practice and notice how the mid-abdominal organs enter as a place of support and articulation.