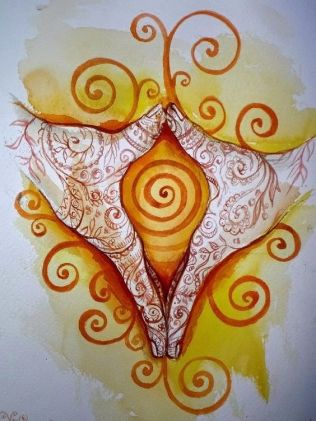 The territory of the second chakra, the reproductive organs can add lots of layers to grounding us to the earth and countering the reach of the upper extremities into space.  Let’s look at the different structures to begin our explorations.

The female reproductive system consists of the ovaries, fallopian tubes, uterus, vagina, vulva and mammary glands.  This system produces the female sex cell, the ova, and creates an environment for fertilization and subsequent development of the fetus.

The uterus is in the center of the lower portion of the pelvic bowl slightly above the pubic arch and at the same level as the coccyx.  It lies atop of the bladder.  It is a small, muscular, pear-shaped organ.  In its non-pregnant state it measures approximately three inches in length, two inches in width and one inch thick.  It has very strong, but stretchable muscular fibers.  Most of its outer surface is covered by peritoneum; it is sub peritoneal.  The uterus is moveable, but held into place by peritoneal ligaments.

The function of the uterus is to hold the embryo during pregnancy and expel the fetus at birth through powerful contractions.  Each month the inner lining of the uterus undergoes changes in preparation for a fertilized egg.  If fertilization does not occur, the lining is sloughed off in a hemorrhagic process known as menstruation.

The ovaries lie above and on either side of the uterus in the folds of the broad ligament with e mesentery attachment called the mesovarium.  The ovarian ligament anchors each ovary to the uterus.  They are partially encircled by the fallopian tubes, which are also nestled in the broad ligament.

The ovaries contain between 40,000 and 400,000 immature ova.  Alternating between the two ovaries, one ova develops and is discharges every 28 days during childbearing years.  The ovaries secrete estrogen and progesterone.

The testicles, penis, prostate gland and seminal vesicles form the male genital system.  The urethra located in the penis connects the genital and the urinary systems.   The genital system produces and stores sperm and secretes semen for reproduction.  The genitourinary system ejaculates seminal fluid and eliminates urine from the body.

The testes are contained in a pouch of skin called the scrotum.  They are located externally below the pubic symphasis and in front of the perineum.  The testes, like the ovaries, develop along the back wall of the abdominal cavity and descend into the scrotum just before birth.

There are two testicles contained in the scrotum.  The testicle, a slightly flattened, oval-shaped gland, is about the size of a walnut.  The tunica albuginea – the outer cavity of the testicle – has a tough, fibrous, white surface, which is comparable to the outer coat of the eyeball.  Internally, the testes are divided into about 250 elongates pyramidal compartments, each containing a lobule formed from two or more seminiferous tubules.  These seminiferous tubules form sperm.  The epididymis, a coiled C-shaped structure is located along the upper posterior border of the testicle and is a storehouse for sperm cells.

The testes produce, store and distribute spermatazoan and act as an endocrine gland secreting testosterone.

The seminal vesicles are locates in front of the rectum along the lower, posterior surface of the bladder and behind the prostate gland.  The seminal vesicles are two small, convolutes pouches which secrete a viscous liquid that combines with sperm from the testicles to produce semen.  This liquid also contains nutrients that support sperm metabolism.

The prostate gland is located behind the pubic symphasis just below the bladder.  The prostate gland encircles the tube of the urethra with two lateral lobes and a median lobe.  Smooth muscle is interwoven throughout the gland to facilitate emission of semen through the ejaculatory ducts that converge within the prostate gland.  The prostate gland secretes an alkaline substance that combines with the seminal fluid to protect the sperm from acid present in the male urethra.

gonads serve as a pivot point or base of support

Find support for the low back with the ovaries or loops of the vas deferens.

use organ support for endocrine balance

energy lines through the urogenital system

*credit here is owed to Jean-Pierre Barral and Bonnie Bainbridge Cohen.  Some of this material comes directly from their manuals.